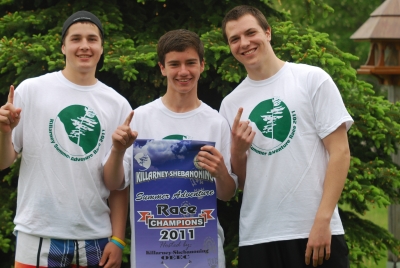 Despite the rainy weather, it was a spectacular day for the third annual Sudbury Catholic Outdoor Adventure Race in Killarney on June 8, 2011. Students from all four of the Board’s secondary schools entered teams to take part in a four part outdoor race which included biking, canoeing, orienteering and a mystery challenge which involved a first aid rescue exercise. A total of fifteen teams with three students per team participated and, although rain-soaked for part of the race, managed to keep smiles on their faces throughout the entire challenge. The past two years has seen St. Charles College and then St. Benedict take home the coveted banner, and this year St. Charles managed to win back the first place spot. A team from St. Benedict won in terms of time, however, due to a small mistake in the orienteering section, they were given a 5 minute penalty which put the St. Charles team consisting of Adam McKibbon (Grade 12), Michael Wandziak (Grade 11) and Jonah Lynott (Grade 11) in first place. Awards were also given out for first place for a co-ed team as well as an all-girls team.