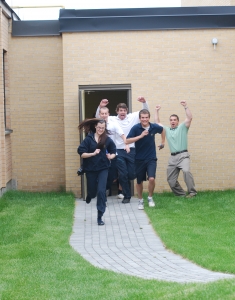 Immediately after the ribbon cutting, students at Bishop Alexander Carter Catholic Secondary School stormed the pathway into the school’s new courtyard on June 9, 2011. At the official opening for the courtyard, staff and students joined together to celebrate the vision of many of the students. This courtyard has been a space that the school had been planning for several years and had finally come to fruition as a result of a speak-up grant that was applied for and granted by the Ministry of Education. Grade twelve students from last year had been collectively planning for a quiet restful place to gather between classes and during breaks, but until this past year, the monies were unavailable. Because of the funding from the successful Speak Up grant application, the school officially open their courtyard on June 9, 2011, which includes several picnic tables, a lush green lawn, a bricked pathway and several benches and picnic tables – which were built by the school’s woodshop classes. Lori Roy, a Bishop teacher who worked with the students and their applications was thrilled with the space and the happiness of the students. “Before, this space was just rocks and dirt, and a few holes in the ground as a result of some unsuccessful attempts to make it into something better,” Roy stated. “ Now, it is a quiet, reflective, positive gathering space for our grade twelve students and as a result they are just ecstatic. The only sad part, is that the students who were successful in their grant application have already graduated so they weren’t able to be here for the official opening. I really hope they will come back to visit to see that their dream became an actuality – our presents students will be forever grateful for this gift.”
As part of the Ministry’s Student Voice Initiative, Speak up Grants allow for projects inspired by students’ ideas to become a reality.