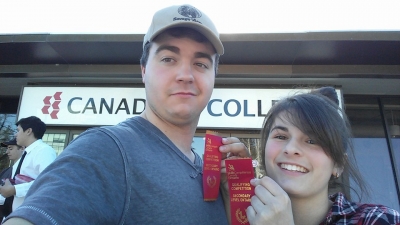 The Ontario Technological Skills Competition (OTSC) is Canada’s largest skilled trades competition, hosting over 67 contests, 2000 competitors and 20,000 spectators at RIM Park in Waterloo. One of those 67 contests is TV Video Production, and in order to compete at the OTSC, participants must first make it through a qualifying round.

On Saturday, April 16th, 2016, Autumn Millar and Bradford Bourque, two Specialist High Skills Major (SHSM) Information & Communications Technology (ICT) students at Bishop Alexander Carter Catholic Secondary School, travelled to Canadore College in North Bay to compete againstt other teams from various secondary schools around Northern Ontario. Only the top three competitors who received at least a 60% score in the qualifying round were permitted into the OTSC. The task was to produce a thirty-second public service announcement video on the theme of reducing your carbon footprint.

Competitors had to complete their filming and editing within a specific amount of time, after which their work would be critiqued, reviewed and evaluated by a number of judges. When the results came in, Autumn and Brad were awarded first place and will now be competing in Waterloo on May 3rd for the provincial title. This marks the third consecutive year that Bishop Carter has won first place at the OTSC Qualifying Round for TV/Video Production. Autumn has been present for each of those three years. “Brad and Autumn are excellent students,” says Steven Facchini, the teacher of the SHSM ICT program at Bishop Carter. “Aside from video production, they’ve demonstrated excellence in 2D graphic design, 3D modelling, web development, game programming, special effects and various other media production skills that I teach in my program. We are all extremely proud of them. They are undoubtedly looking forward to the provincial competition in May.”