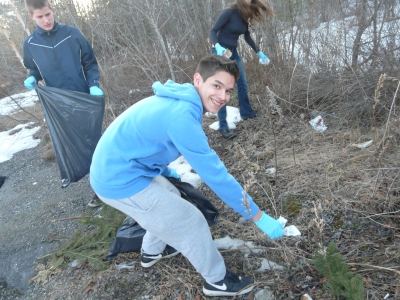 Students from Bishop Alexander Carter did their part in fighting world hunger this past month by taking part in a 30 hour famine.The group of 90 students formed groups of 12 to compete in several character, team, and global awareness building activities such as a community clean-up, a scavenger hunt, and several art activities. Students were even lucky enough to have a guest speaker, on behalf of Development and Peace, from Sierra Leone. While students were hard at work on a full length motion picture movie being produced by the specialist high skills major class, teachers taking part were also hard at work making a chocolate and vanilla marble cake with crisp maple bacon to garnish – a treat for students after the famine was over, and that is when the hunger began to set in. But determined to make a difference and stick to the goal, students fought the hunger knowing that it would all be over after the 30 hours.

Wrapping up the events before the big luncheon, students and staff took part in a morning prayer service. “We all really had a good time, and we met so many new interesting people,” stated Kelsey Blais , Bishop Alexander Carter student. “At the end of the day, it was great to know that each and everyone of us is changing someone’s life, maybe not forever, but even for just a second, that’s what counts.” Raising well over $1 400, students were proud of their efforts and knew that they had made a difference not only in their community, but in the world as well.