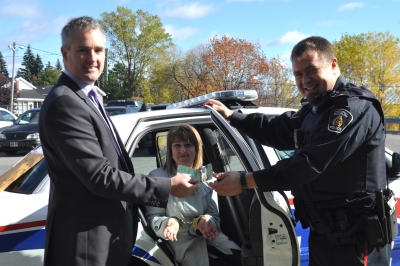 On Wednesday, October 23, Bishop Alexander Carter Catholic Secondary School principal Cassandra MacGregor was taken away in handcuffs by their school liaison officer, Victor LaRoux. As part of the school’s memorial fundraiser for Mackenzie Rooney (a BACCSS student who passed away on August 6, 2012 at the age of 16), MacGregor was met at the school by LaRoux, handcuffed and taken to the Greater Sudbury Police Station and booked. MacGregor had to raise at least $1000 in order to be release as part of her own fundraising challenge for the fundraiser. By the end of the day, MacGregor suppassed her goal of $1000 by collecting $$1243.15 to add to the school’s collective total as the students and staff have been canvassing their neighbourhoods for the past week. The group is capping off this fundraising drive on Tuesday, October 29 with a entire school Zumba session in the Hanmer Metro parking lot and then just over an 8 km walk back to the school. The students will be joined that day by Mackenzie Rooney’s parents.