BAC Students learn about The Holodomor 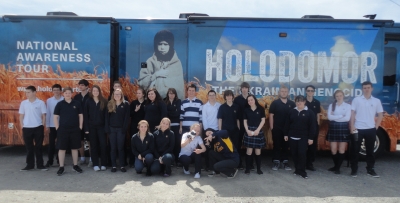 Bishop A. Carter students took part of a enriching and eye opening activity. The term Holodomor (death by forced starvation, in Ukrainian) refers to the starvation of millions of Ukrainians in 1932-33. The Holodomor was the result of policies of the leadership of the Soviet Union and the Communist Party, which inflicted the Holodomor on the Ukrainian countryside.The ‘Holodomor National Awareness Tour’ is an RV travelling across Canada and the USA. The RV is set up like a theatre with 12 “4K” televisions. They are also equipped with tablets which students used for group work and interactive learning. Students left the RV with a better understanding of what a genocide really is and the importance of the tolerance to other cultures.